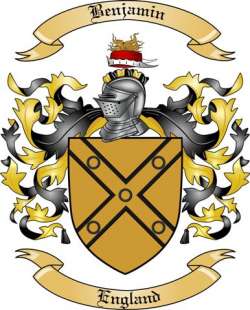 Children of John and Abigail:

The Pedigree of the Ancient House of Benjamin runs back to the time of William the Conqueror, under him, and among the many Barons of that period was Walter de Lacey (1074). This family, through its descendents has come to be known as the Benjamin’s, which includes the great family of that name now in America. After Walter de Lacey came Roger in 1095, Ilbert in 1137, and John in 1222. Henry III was then king. It was in this reign that the confederacy of Barons was dissolved and the landed gentry became the leading caste in politics and society. In the reign of Edward III, the de Lacey appears as landed gentry under the name or Beryton of Stoke-Lacey, and a few years later as the Berington of the same place. Tradition says that it was about 1484 that the name Berington became changed to Benjamin and it is now practically certain that John Berington II, the next John after de Lacey of 1222. of the ancient de Lacey stock is the ancestor of the American Benjamin family.

There were 3 John Benjamins in the late 16th Century in the Heathfield-Chalvington area. This one was the son of Gyles, and he was baptized 4 Oct. 1554 in Chalvington. The proof is in the descent of land: at the next manor court after Gyles’s death, John came in and claimed succession, as the eldest son, to Gyles’s freehold called Parrages. Gyles also had 2 copyholds in the manor and, by custom, those went to the youngest son–John’s brother Thomas. Thomas, however, died 1594 leaving only a young son Nicholas, and when Nicholas died in 1598 John ended up with all his father’s land.

Gyles’s father was John, and this is established also through land records.  The manor record of 1550 show the sale of Parrages to “John Benjamin and his son Gyles.”
This John was born by 1496, probably not in Chalvington because the manor records have no Benjamins before he appears in 1517. He was fairly wealthy, judging from the amount of tax he paid in 1525. There was an earlier Benjamin who bought land in Ringmer and Glynde, only about 2 miles away, in 1409.

In the name of God Amen: the 4th day of September, in the year of the reign of our sovereign Lord James, by the grace of God of England, Scotland, France, and Ireland the fifth, and of Scotland the one and fortieth:

I, JOHN BENJAMIN of Chaunton [Chalvington], in the County of Sessex, yeoman, being sick in body, but of good and perfect remembrance, thanks be unto Almighty God, do make and ordain this my last will and testament, in manner and form following:

Item: I bequeasth my soul into the hands of Almighty God, and my body to be buried in the churchyard of Chaunton.

Item: My mind and will is that ROBERT HOOKE and RICHARD HOOKE, my wife’s brothers, shall have, hold, and enjoy to them and their assigns, all and singular, my lands lying in Chaunton with the appurtenances thereunto belonging and during the space of eight years immediately ensuing the time of my decease yeilding and paying therefore unto every one of my children except my son JOHN, the sum of six pounds at their several ages of one and twenty years. And if any of my said children happen to decease before they shall accomplish the age of one and twenty years, then my will is that the portion of him, her, or them so deceasing shall be equally divided amongst my other children surviving at their several ages of one and twenty years. And futhur my mind is that whatsoever profit shall arise of my land in the eight years aforesaid, over and above the several sums bequeathed to my children as aforesaid, the said profit shall rebound unto my wife, and be paid unto her by her said brothers towards the bringing up of my children.

Item: I give and bequeath unto my son JOHN two great chests, one cupboard, and one table standing in the hall and one mault safe[?].

Item: I give and bequeath to everyone of my children one pair of sheets a piece.

Item: I give to the poor people of Chauton two shillings.

Item: All the rest of my goods and chattels I give and bequeath to JOANE my wife whom I make and ordaine sole executrix of this my last will and testament.

In witness whereof I have hereunto put my hand and seal the day and year above said.

Proved: 12 February 1607/08 by JOANNE BENJAMIN, relict of the deceased, and executrix who swears to well and faithfully administer same.

In the name of God, Amen, the 20th Day of May in the year of the Reign of our Sovereign Lord James by the Grace of God of England, Scotland, France and Ireland, King Defender of the Faith; that is to say, of England, France and Ireland the 17th, and of Scotland the 52nd, AD 1619: I, JOANE BENJAMIN of Chauton [Chalvington] in the County of Sussex, Widow, do make and ordain this my last Will and Testament in manner and form following:

First, I bequeath my soul into the hands of Almighty God, ,y Heavenly Father, and my body to be buried in Christian burial.

Item: I give to JOHN BENJAMIN, my son, and to SUSAN EBATES, my daughter, 12 Pence apiece of good and lawful money of England.

Item: I give to THOMAS BENJAMIN, my son, 20 Shillings of like lawful money, one great iron pot, one pair of course sheets, one great paltter and two pewter dishes.

Item: I give and bequeath to GILES BENJAMIN, and RICHARD BENJAMIN, my sons, 30 Shillings apiece of like lawful money.

Item: I give to GILES one chest and one pair of sheets.

Item: I give to the said RICHARD one chest and one pair of sheets.

Item: All the rest of my goods I give and bequeath to JOANE BENJAMIN, my daughter, whom I make sole Executrix of this my last will.

In Witness wherof I have here unto put my hand and seal the day and year above said.

Note: The dates for the making and the probating of the will are the same. Possibly an error here made by the scribe coping the wills into the will book?. – DJW
According to Parish Records, JOANE BENJAMIN was buried on 23 May 1619. – FEB

John arrived with his family in Boston Harbor, Sunday evening, 16 Sep 1632, on board the Lyon.    His brother, Richard Benjamin, came with him on the same voyage and settled in Southold, Long Island.  They sailed from London June 22, 1632, arriving in Boston September 14/16, 1632. The master, William Pierce, brought 123 passengers.  “He brought one hundred and twenty three passengers, whereof fifty children, all in health. They had been twelve weeks aboard and eight weeks from Land’s End.”  The Lyon made four  trips: 1630, 1631, 1632, 1632. The Lyon hit a reef April 10, 1633 (Peirce was ‘driving’) and it sunk, replaced by the Rebecca, built in the colonies.

Richard Benjamin came to America on the Ship “Lion” on 16 September 1632 and entered at the Port of Boston. On this same ship were his brother John and his wife Abigail (Eddy) Benjamin and four small children. Richard was entered on the passenger list as a seperate individual and was listed as having come from Heathfield, Sussex, England. Richard took the Oath of Allegiance to King Charles on 2 June 1632 before leaving England.

Richard was named a Proprietor of Watertown, Massachusetts in 1642. Apparently he married there about 1637, as a daughter, Mary, was born in Watertown in 1638.

About 1645 he and his family moved to Southold, Long Island, New York, where he resided until his death.

1662 – Richard signed the appointment of Capt. Youngs for the Hartford Colony under the Charter. At that time, Southold was a part of the Hartford, Conn. Colony and was included in it’s charter.

May 1664 – Richard applied to the General Court of Conn., along with Jeffery Jones and others, to be made a Freeman under Connecticut and he was accepted that same month.

8 Apr 1673 –  “Richard Benjamin yeoman of Southold” sold to Thomas Tusten and Priscilla his wife four acres in the Old Field, Cauchauge, seven acres on the north side of town, one acre in the Town Field, and four acres “more near the town, on the north side John Tuthill’s lot”; Anna Benjamin made her mark and joined in the sale, and one of the witnesses was Richard Benjamin Jr. In October 1684 Thomas Tusten (joined by Priscilla Tusten) sold to David Gardiner Sr. “all my housing, lands and meadows in Southold, including “land which was given unto the said Thomas and Prisilla his wife by their father Richard Benjamin” .

9 Jun 1674 – Deacon Barnabas Wines and Richard Benjamin are freed from military training…”watching and warding”. Both these persons may have been freed on account of their office, as well as age, for in the same year that the second pastor was settled, the people in the Town Meeting appointed a gravedigger and church sexton. They elected Richard Benjamin, who’s home was immediately west ot the church and cemetery. He was authorized to receive 18 pence for the grave of each adult and 12 pence for each child. He was called “general factortum” of the first settlement of Southhold, Long Island.

This entry was posted in 14th Generation, Line - Shaw and tagged Father of Immigrating Brothers, The Lyon 1632. Bookmark the permalink.