Children of  Samuel and Dorothy: In the History Of Goffstown, NH it states he had 11 children and only 2 came to Goffstown, NH

– David Green in “Salem Witches III: Susanna Martin”, The American Genealogist 1982, pg 17 (Possibly vol 59) says that he is the Samuel Hadley who testified at the August 1734 court case in Yarmouth Maine. His age was stated as 82.

Samuel was a member of the church in the West Parish of Amesbury, Mass. He may have moved to Buxton, ME or that area. He was given a grant of land for military service in what became Buxton, ME, and there is a record of a Samuel Hadley, age about 80, in the York, ME county court records. One source says he died in 1726 in Amesbuarner, NH which he sold to Capt. Francis Davis. The location of his home was in the northwesterly corner of Amesbury near the point of intersection of the town lines of Amesbury and Haverhill in MA and Plaistow and Newton in NH. He was a weaver, a tything man in 1702 a member of the church in west parish in 1726, and in the training band.

He was a weaver by trade. He was one of the training band of Amesbury in 1680 and a soldier in the Narragansett War under Capt. Frank Davis.

He was a soldier in the Narragansett War and received provincial government the grant of a share of land in the township of Buxton, Maine. He also was granted with others one-half of the share of the township of Warner, New Hampshire in consideration of being a soldier in the Narragansett War, which was subsequently disposed of Capt. Francis Davis. The location of his home was in the northwesterly corner of Amesbury near the point of the intersection of the town lines of Amesbury and Haverhill, Massachusetts and Plastow and Newton in New Hampshire.

” At Ipswich Quarterly Court, 29 March 1670, George Hadley, in behalf of his son Samuel Hadley, sued Joseph Pike for non-performance of indentures.  The files reveal that on 22 Feb 1664/65, Samuel Hadley of Rowley was apprenticed for five years to Joseph Pike of Rowley (and of Newbury) to learn the trade of weaver as well as to learn to read and write.  At the end of the time he was to have a good loom with tackling and a shuttle. Testimony indicates that Samuel had not achieved notable success in either weaving or literacy, though he bragged about his skill with a loom.  When the five years were up, Pike offered Samuel’s father an old loom that appeared to be rotten.  The court found for the plaintiff and ordered Pike to provide ” A good loom with all things fitting for it..”  Samuel Hadley was at North Yarmouth,( now Yarmouth, ME.) around 1674, for he deposed in August 1734, aged about 82, that he had formerly lived at North Yarmouth and knew that John Mosley (i.e. Mosier) had cultivated Mosier’s Neck for 60 years past. he had moved to Amesbury by 20 Dec 1677, when he took the Oath of Allegiance.  He was a nephew of John Proctor, who was executed for alleged witchcraft, Salem 19 Aug 1692 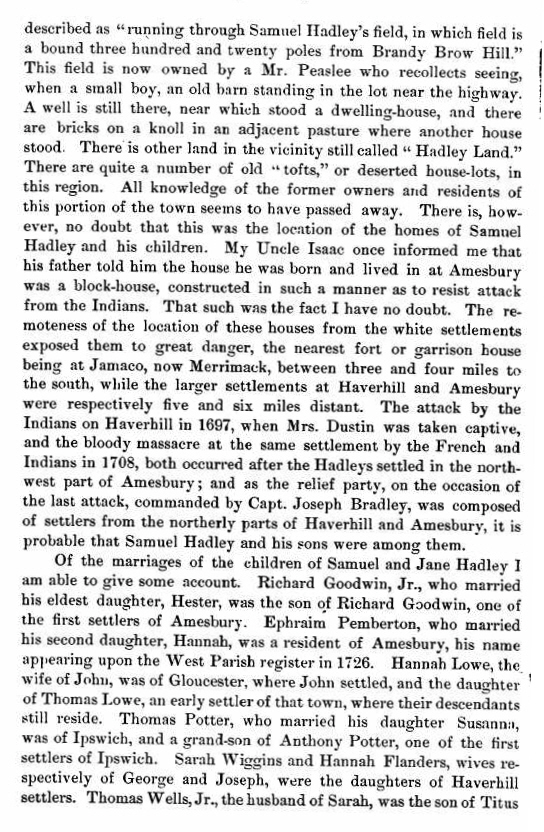