Children of  Orlando and Sarah Sargent:

Children of Orlando and Sarah Annis:

Orlando Bagley Jr. was a man of considerable influence in the district, a constable, who apprehended his friend and neighbor, Susannah Martin (Wikipedia), for a witch.  He is at least partly responsible for the execution by hanging of this unfortunate woman.  Susannah was the wife of our ancestor George MARTIN.

The family connections go on.  Susannah was first formally accused of witchcraft in 1669 by William Sargent Jr., Orlando Bagley Jr’s brother-in-law and son of William SARGENT .  In turn, George Martin sued Sargent for two counts of slander against Susannah, one for accusing her of being a witch, and another for claiming one of her sons was a bastard and another was her “imp.” Martin withdrew the second count, but the Court upheld the accusation of witchcraft.  A higher court later dismissed the witchcraft charges.

On April 30, 1692 a warrant was issued for Susanna’s arrest on a charge of witchcraft and she was arrested an May 2nd. “When she saw Orlando Bagley approaching on the morning of her arrest, little did she dream of his errand. He was a personal friend of long standing, and we can but faintly imagine her surprise when…” he read the warrant.

According to this Warrant I have apprehended Susanna Martin Widdow of Amsbury and have brong or caused her to be brought to the place appointed for her examination pr Me.

Susanna Martin was accused by a man that was in love with her and when she would not return the favor he accused her of witchcraft. And what did her in was she was summons to court many times and on the last time she was summons it had rained and the roads were dirty and she lifted her shirt to walk so she would not get muddy.  She was asked in court why her shirt was not dirty, and she was so feed up with everything she said “I flew” in a smart butt tone and that did her in.

Probably the worst indignity that Susanna was twice forced to submit to was the physical examination for evidence of a “witch’s tit or physical proturberance which might give milk to a familiar.” No such deformity was found in Susanna but it was noted that “in the morning her nipples were found to be full as if the milk would come,” but by late afternoon “her breasts were slack, as if milk had already been given to someone or something.” This was an indication that she had been visited by a witch’s familiar, and was clear evidence of guilt.  Perhaps Orlando Bagley Jr conducted these examinations.

A few years ago, a descendant of Susanna Martin visited Salem and  found out that her name was not even mention in a lot of the things that were being told or posted. He sued the town and brought all the paperwork with him to show that she was part of the orginal 7 that were hung and the town therefore changed everything to include her.

Jarvis Ring was a witness in the Susanna Martin trial of 1692 in Salem. She was accused of being a witch and acted the part. She was hung on 19 July of that year with Rebecca Nurse, Sarah Good, Elizabeth How and Sarah Wilds. He and his wife signed the petition in favor of Mrs. Mary Bradbury in 1692 with his wife and a hundred other people on 22 July 1692. They claimed that she was a ‘diligent attender upon God’s ordinances’ and that she never had a falling out with any of her neighbors, but was ‘always willing to do for them what lay in her power night and day, though with hazard of her health.’ Though she was accused repeatedly in Salem and was supposed to have turned into a ‘blue boar’ one time, she did escape execution. Soldier in 1698 and 1702.

Javis Ring of Salisbury maketh oath as followeth, That about seven or eight years ago he had  been several times afflicted in the night time by somebody or something coming up upon him  when he was in bed and did sorely afflict by laying upon him and he could neither move nor  speak while it was upon him, but sometimes made a kind of noise that folks did hear him and  come up to him and as soon as anybody came, it would be gone. This it did for a long time before and since but he did never see anybody clearly, but one time in the night it came upon me as at othr times and I did then see the person of Susanna Martin of Amesbury. This deponent did perfectly see her and she came to this deponent and took him by the hand and bit him by the finger by force and then came and lay upon him awhile as formerly, and after a while went away. The print of the bite is yet to be seen on the little finger of his right hand for it was hard to heal (he further saith). That several times he was alseep when it came, but at that time when bit his finger he was as fairly awake as ever he was and plainly saw her shape and felt her tooth as aforesaid.

Sworn by Jarvis Ring abovesaid May the 13th 1692
Before Me
Robt. Pike Assit. at Salisbury 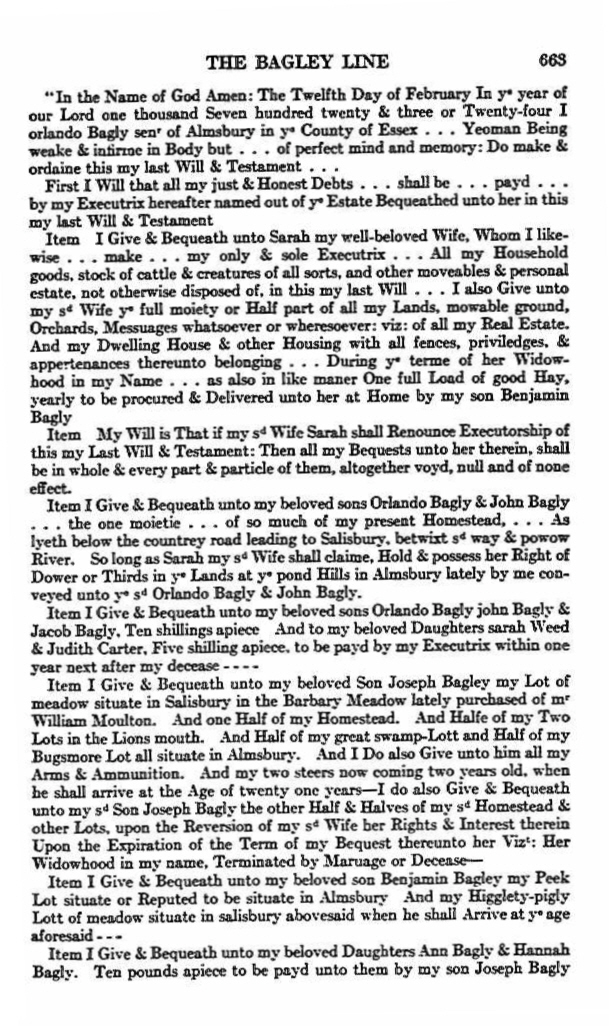 This Orlando Bagley had in his possession a certified copy of his birth in his own handwriting, dated 1749. It also contained his father’s marriage to Sarah Sargent on December 22, 1681. On October 13, 1712 he was chosen town clerk, which office he held for forty-two years from 1712 to 1754; also the right to keep a public school, ‘to teach to wright and sipher such as shall come to him, they paying as he and they agree’; in 1716, he gave land for a school.

His land was near the town pound. He possessed fine business talents and grew in popularity as age came on. He served several years as selectmen and held courts, officiating as trial justice on many occasions. Wills and deeds in his handwriting are numerous, and his marriages for several years far exceeded those of the minister’s, numbering one hundred in all. He helped tunnel The Ridge in Amesbury, and in 1753, when another effort was made to recover the ferry, called Amesbury Ferry, he was one of those chosen to search the records in order to ascertain the condition of the claim in regard to it.

On April 16, 1736, at a meeting of the First Church of Amesbury, it was proposed that their brother Orlando Bagley and their brother John Tuxbury be appointed to the service to discuss with their brother Thomas Hoyt his frequent neglect of the public worship and the Sacraments of the Lord’s Supper and report of the reason thereof (First Church, Amesbury, Mass. Records).