Oliver W ells was born 19 Jun 1732 in Groton, CT.  His parents were Thomas WELLS and Elizabeth HOWLAND.  He was married to Azuba  FITCH on 7 Feb 1760 in Norwich-Bozrah, CT by Rev. James Fitch.   Oliver died 25 Oct 1810 in Colchester, CT and is buried in Wells Cemetery , Colchester, New London County, Connecticut, 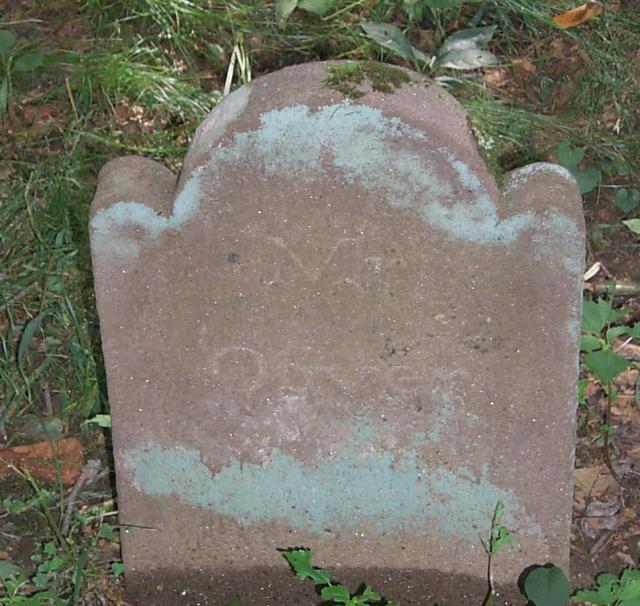 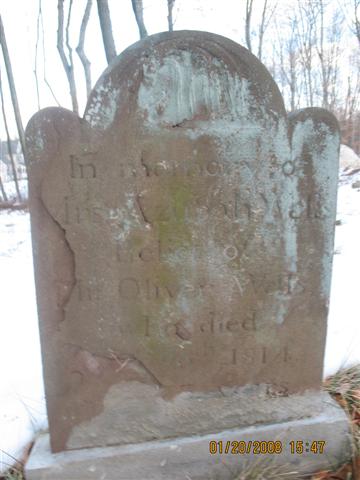 Children of Oliver and Azuba:

Genealogies have wildly different dates of birth for the Wells children. A primary source doesn’t have any birth dates.   I’ve rearranged according to my best guess that Oliver Jr. came first, the later dates are more reliable than the earlier ones and the unknown birthdates at the end.

Here is a different list of children from the Wells Surname DNA Study.  It’s very different, but at least Ann Wells is in both lists and born about the same time

On the 9th of July 1779, an alarm at Saybrook called for help from this town.  Captain John Ventres, with his company, responded, and repaired to the defense of that place. Nothing serious appears to have resulted, however, and the company was retained in the service only two days. This company was then attached to Colonel Worthington’s regiment. The pay roll for that expedition shows that the following wages—remarkably high, on account of a depleted currency—were paid, per day, for service: To the captain, £2 8s.; lieutenant, £1 12s.; ensign, £1 4s.; sergeants, £1 9s. 2d.; corporals, £1 7s. 3d.;
privates, 10s. 6d.

In September 1781 another alarm appeared at Saybrook, and Capt. John Ventres and his company again entered the service. They were under the regimental command of Col. John Tyler, and used six days—from the 7th to the 12th, inclusive—in the expedition.

Abby never married and was buried at age 68 in the family cemetery in Colchester. 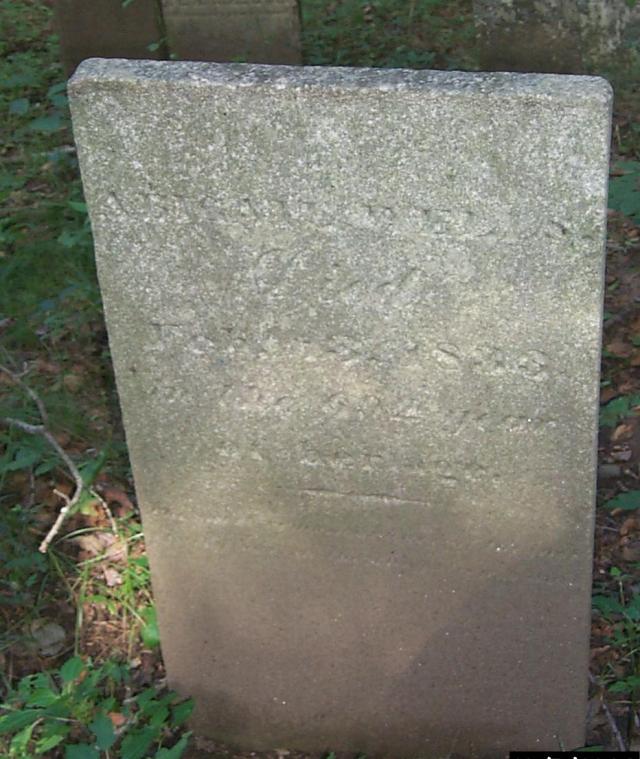 Children of Jesse and Esther 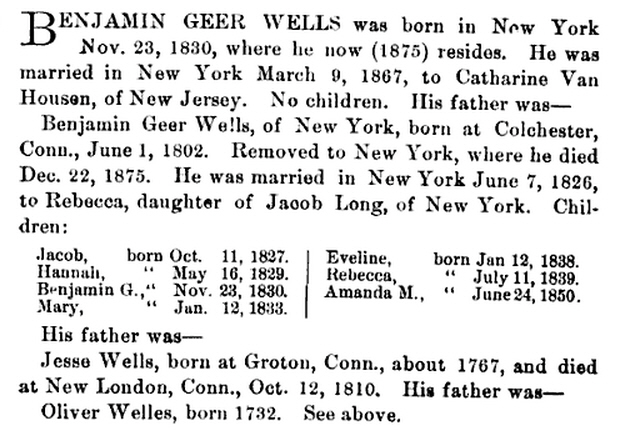 Benjamin Geer Wells Bio — Source: History of the Welles Family in England and Normandy: With the Derivation from Their Progenitors of Some of the Descendants in the United States (Google eBook) 1875

Members of the lower house of the legislature have been sent from the district, including or consisting of Luzerne county, as follows, the district comprising Luzerne, Bradford and Susquehanna, from 1814 to 1828. inclusive: Roswell Wells, 1797-8

District No. 1, for which the first appointment was made in 1806, was composed of Huntinoton, Nescopeck, Salem and Sugarloaf townships until 1811; then of Huntington, Nescopeck and Salem townships six or seven years; then of Wilkes-Barre borough and township and part of Covington township till 1835, when it comprised only Wilkes-Barre borough and township; part of Covington township also belonged to it in 1836 and 1837. Justices for this district were commissioned as follows: John Myers and Roswell Wells; 1823,

Some genealogies say Nathan was born c. 1762 Colchester, but his 1824 gravestone states he was aged 44 years. 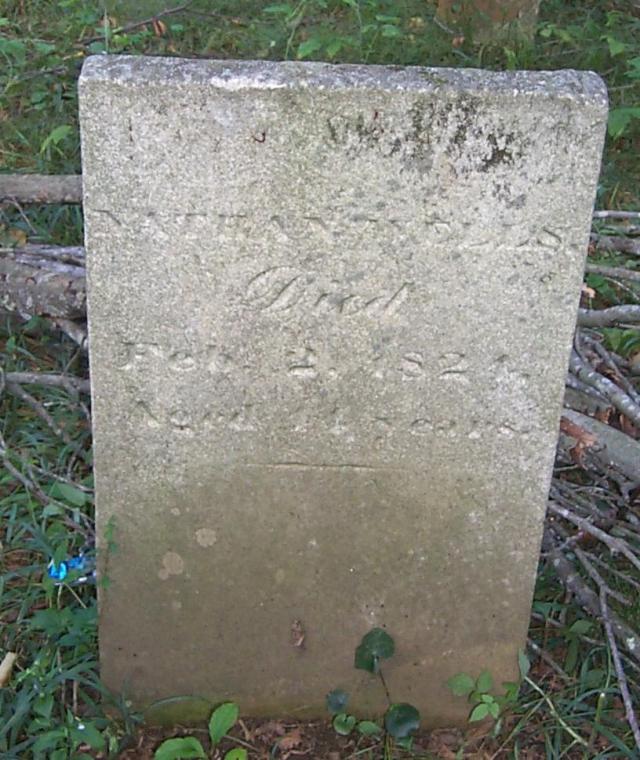 Desire was a widow for almost fifty years. She seems to have lived with different families every decade. In the 1860 census, “Dessie” was living with her daughter Eliza Perry in Colchester, CT. 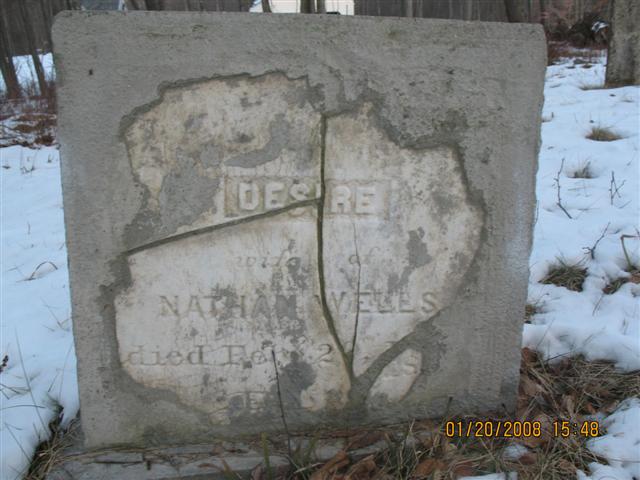 Children of Nathan and Desire:

In the 1850 census, George and Mary were farming in Plainfield, Essex, New Jersey.  In addition to daughter Adelia, Sarah Smith (b. 1833 NJ) and John Wells (b. 1843 NJ) were living with the family.

Children of George and Mary Babcock 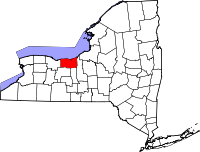 Palyrma is in Wayne County, NY 20 miles southeast of Rochester. Mormon. founder Joseph Smith, Jr., whose family lived on a farm that straddled the line between Palmyra and Manchester, claimed to have been visited by God the Father and Jesus Christ in 1820, an event known as the First Vision. 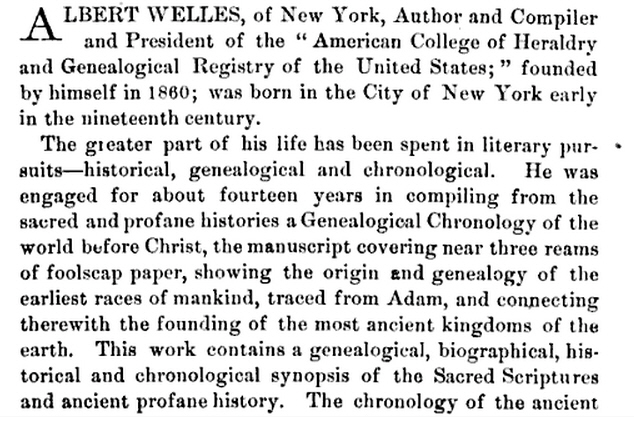 Albert Welles Bio 1 – Source:  History of the Welles Family in England and Normandy:. 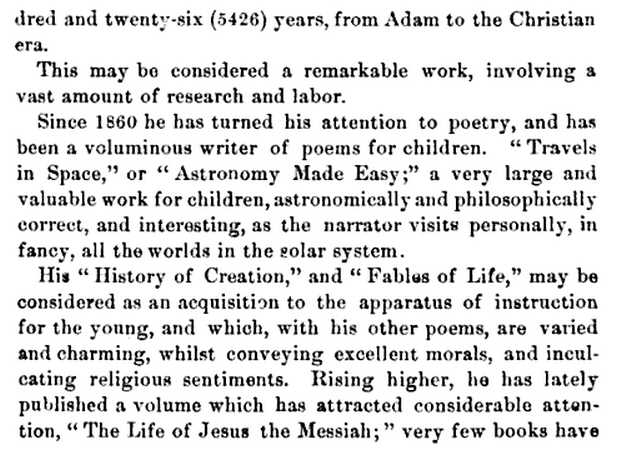 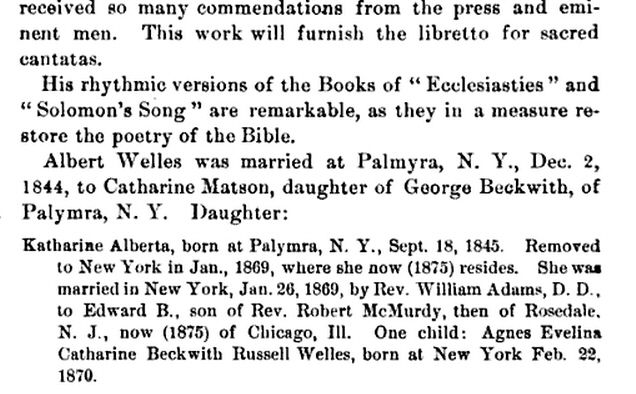 ii. Mary Ann Welles b. 1821 in Elmira, Chemung, NY (Connecticut?); d. 1897 in Plainfield, N.J In the 1860 census, Mary was living with her sister Adelia and brother-in-law Jared Sparks in Williamsburg, Brooklyn.

In the 1860 census, Adelia H and Jared lived in Williamsburg, Brooklyn. Jared was working as a lawyer. In the 1870 census, Adelia was living in the large household of Rev. David Morris (b. 1789 Wales) in Brooklyn Ward 13. 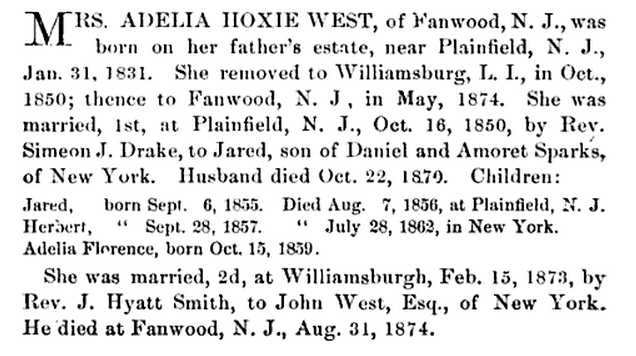 Adelia Hoxie Wells Bio — History of the Welles Family in England and Normandy:.

History of the Welles Family in England and Normandy: With the Derivation from Their Progenitors of Some of the Descendants in the United States (Google eBook) By Albert Welles  1876

This entry was posted in -8th Generation, Be Fruitful and Multiply, Historical Monument, Line - Miner, Veteran and tagged Colchester CT. Bookmark the permalink.