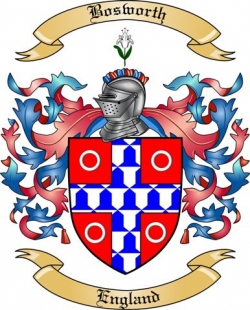 Edward Bosworth was born 1589 in Market Bosworth, Leicestershire, England. His father was Edward BOSWORTH Sr. (1565 – ?).    He married Mary [__?__] 1610 in Market, Bosworth, Leicestershire, England.   Edward Bosworth, who with his wife Mary….had with them their sons…a daughter Mary, and her husband William BUCKLAND… came to the New World in the ship Elizabeth Dorcas.  The ship was detained at Gravesend, Eng., from 22 Feb 1634, until early spring, while it was ascertained that all passengers had secured the necessary paper work for immigration.  The Elizabeth Dorcas lost sixty passengers and many animals before docking. Many of the bodies were buried at sea.   Edward survived the trip, but he died in Boston Harbor on arrival. From the Diary of Samuel Sewall (Vol. 3, page 396):

Edward Bosworth, the Father, being ready to dye ask’d to be carried upon Deck, that he might see Canaan. When he had seen the Land he resigned his Soul and dyed: was carried ashoar and buried at Boston. 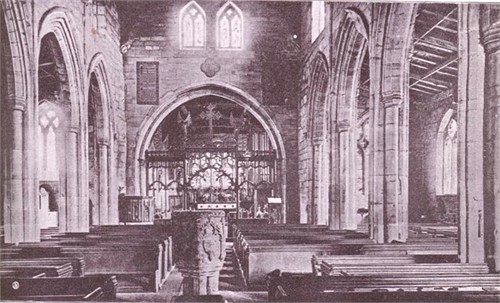 Son Jonathan had already immigrated a few years prior and was living in Cambridge, MA. Edward never made it onto land.  He had borrowed money from Henry Sewall to pay the passage over to New England for his family. His wife was left penniless and was helped by the town.  The money was a loan and the amount was about 100 pounds. The debts were assumed by the three sons and the son-in-law, William BUCKLAND, who had married Mary Bosworth. Jonathan, 22, Benjamin, 20, and Nathaniel, not quite 18 years old, each paid about 20 pounds of the debt..

7 Jul 1634, At Plymouth Court, Edward’s sons Jonathan, Nathaniel and Benjamin, together with William BUCKLAND, were ordered to pay back a a loan to one Henry Sewall, who had loaned money to the Bosworth family for the passage to the New World

5 Aug 1634 – It was “ordered that such monies shall be laid out for the maintenance of Widow Bosworth & her family, shall be paid again by the Treasurer.

Benjamin’s second wife Beatrice (Beatrix) Hampson was born 15 Jul 1623 in London, England. Her parents were Phillip Hampson and Anne [__?__]. She first married Abraham Joslin. It is interesting to note that while Abraham was the son of Thomas Joslin, who helped settle Rhode Island, he did not emigrate with his parents. When they left England in 1635, he was 16 years old and went off to become a mariner. Abraham at various times did live in Scarborough and Hinham, Maine and Boston and Lancaster, Massachusetts. Abraham died July 9, 1670 at sea off the coast of Virginia on the ship Good Fame of New York. The ship Good Fame of New York was owned by Francis Lovelace (in partnership with others) and was described as “a very stronge and handsome vessel, but costly” referring to both materials and labor. Built in 1669, it was generally sent to Virginia and often brought tobacco to New York, afterward to Europe. Francis Lovelace was the second governor of New York and he promoted shipbuilding. When war broke out with the Dutch, the Good Fame of New York and 3 other vessels were seized in Holland. John de Forest was “entertained as cuirugion” on board the Good Fame of New York during 1670, so he is likely the doctor that would have tended Abraham when he was ill. After Abraham’s passing, the widowed Beatrix re-married on September 16, 1671 to Benjamin Bosworth. They then moved to Hull, Massachusetts. Beatrix died January 11, 1712.

“Early in the morning of the 10th of February, 1675/6, Lancaster was surprised by a large number of Indians, who made their attack in five disctinct bodies and as many places, burning the houses in their way, and destroying the people found inside them. Some of the inhabitants, to the number of forty-two, being mostly women and children, among whom were Abraham Josselyn Jr. and his family, took shelter in the fortified house of Rev. Joseph Rowlandson. This they defended upwards of two hours, during which time several of them were killed by the bullets showered upon them. At length the house was set on fire, and the people within were reduced to the sad necessity of either perishing in the flames or resigning themselves to the savages. In their attempts to escape, all the men, save one, were slain; many of the women and children perished on the spot; and the rest, about twenty in number, were seized by the Indians and carried into captivity. Thus perished Abraham Josselyn, as we are assured by Mr. Harrington. Mary Rowlandson, who was one of the captives, met Mrs. Josselyn [Abraham Jr’s wife was Ann (Hudson) Joslin, m. 1672.] , about the 23rd of February, in the hands of the Indians, at a place called Wenimesset, now New Braintree. She found her in great distress having in her arms her little daughter, Beatrice, then nearly two years old. In the course of her captivity, Mrs. Rowlandson heard that this unfortunate woman and her child were stripped by the Indians, knocked upon the head, and cast into a fire, where they miserably perished. Some captive children, who were present, declared to Mrs. Rowlandson, that Mrs. Joslin shed not a tear, but continued in prayer till death put an end to her suffering.”

Nathaniel’s wife Bridget Bellamy was born 1621 in England. Her parents were Jermiah Bellamy and [_?__].. Bridget died in 20 Nov 1690 in Bristol, Bristol, Rhode Island.

Nathaniel resided about 1635 in Hingham, Plymouth. Mass.7 He resided in 1652 in Hull, Suffolk, Mass. Hull “is celebrated for its beautiful beach four miles in length, and for its shellfish and seafood. The town lies between two hills of fine land, near Point Alderton, opposite Boston light-house. It is nine miles…from Boston by water, and twenty-one by land, via. Hingham.”

When Nathaniel first came to Bristol he built a home now 814 Hope Street on the banks of Silver Creek, which was the first frame house built in the town. The Bosworth house was still standing in 1926 and is not only a very old house, but highly interesting in every respect. The place has never been sold, but has been inherited by one generation after another, and in this line of succession was at one time the property of Judge Bourn, who was a member of the first Continental Congress, meeting in Philadelphia. The chairs, used on that occasion, were afterwards sold, and two of them were purchased by Judge Bourn. These chairs still stand in the parlor of Nathaniel Bosworth’s old home “Silver Creek.” Later the place came into the possession of Mrs. James Perry, whose son, the late Rev. Calbraith Bourn Perry, D.D., published a book entitled, “The Perrys of Rhode Island, and Tales of Silver Creek: The Bosworth-Bourn-Perry Homestead.”

Among Bristol’s colonial architecture, one of the oldest and best known is on the east side of Hope Street, just north of the bridge. This is known as “Silver Creek” and was built…by Deacon Nathaniel Bosworth. From its completion to the present day it has never failed to shelter some of his descendants. It was added to from time to tome until it attained its present proportions. In the south-west part – the original house – was held the first meeting for religious worship in Bristol. During the bombardment of the town by Gen. Wallace in 1775, grape shot pierced its walls and lodged between the ceilings, where it was found years later when repairs were being made. In this building, where was organized the Congregational Church Society, was also opened the first school. This was taught by Miss Mary Bosworth, the owner’s daughter.

He appeared on the census on Feb 11 1686 in Bristol, Bristol, RI.7 A census of “All the families in New Bristol” gives…

Nathaniel Bosworth, wife, two children,
Tommy and Edward, grandchildren, no servants
[N.E. Hist. Register, Vol. 34, pg. 404] (per Mary Bosworth Clarke) He was Cong. Church on May 3 1687 in Bristol, Bristol, RI. He was one of the founders of the first church of Bristol, first known as the “Church of Christ,” and afterward called the “Catholic Congregational Church.” He was the first deacon of this church and was known as “Deacon Bosworth” for the remainder of his life. The first religious services in town were held in his house, and he assisted in erecting the first house of worship built there. When the old church was abandoned and a new one built, the baptismal font from the old church was presented to the descendants of Nathaniel who were living in the old home, and it also has a place in the parlor at “Silver Creek.”