I originally thought John HOYT (1614 – 1684) was Alex’s  11th Great Grandfather; one of 4,096 in this generation of the Shaw line. However, I now believe that John’s one-time great – granddaughter Dorothy COLBY was not the daughter of Anthony COLBY II, but instead was the daughter of his cousin Isaac COLBY and Martha PARRATT.

Amesbury Monument – The Golgotha Burying Ground is also found on Rt. 110 (Macy St.), in Amesbury Massachusetts about a half a mile east. It is the first burial ground in Amesbury but there are no markers.

Children of  John and Frances:

.
Children of John and Mary Jewell:

The earliest information concerning (1) John1 Hoyt, which has yet been obtained, is that he was one of the original settlers of Salisbury, Mass. His age at that time can not be accurately determined, but, from the fact that he had at least two children born previous to 1639, it seems probable that he was born about 1610-15. He was chosen selectman, March,1681-2, and moderator of town-meeting, April, 1687 (the same year hedied), hence he could not have been very aged and infirm at that time. Whether he came directly from England, or had previously lived in other towns in America, is uncertain. His name does not appear among the passengers on any of the early emigrant ships of which we have seen any record, and is not found on any of the lists of freemen contained in the Massachusetts Records. He may have come into the country when a minor.

He had two wives, both named Frances. He probably married first wife about 1635, though we have found no record of it. She died Feb. 23, 1642/43, and he married his second wife in 1643 or ’44. His second wife survived him, and was living in 1697. The town reords of Amesbury state that “Sargent Jno Hoyt sen. died on ye 2 day & was buried on ye 29 day of Feb. An. Dom. 1687-88.” The county records at Salem state that he died on the 29th of February, the town records are probably correct. His eldest son, John, had the homestead, paying his step-mother a certain sum annually; but grandson Joseph received the deed of it, on the same condition, 1689. There are quite a number of deeds on record from (1) John Hoyt to his sons, John and Thomas, especially the former, eldest son.
(*) Old Norfolk County Records. Norfolk included Amesbury, Exeter,Hampton
Haverhill, Salisbury,–towns north of the Merrimack.

John was killed by Indians on the Haverhill Road to Andover 13 Aug 1696. 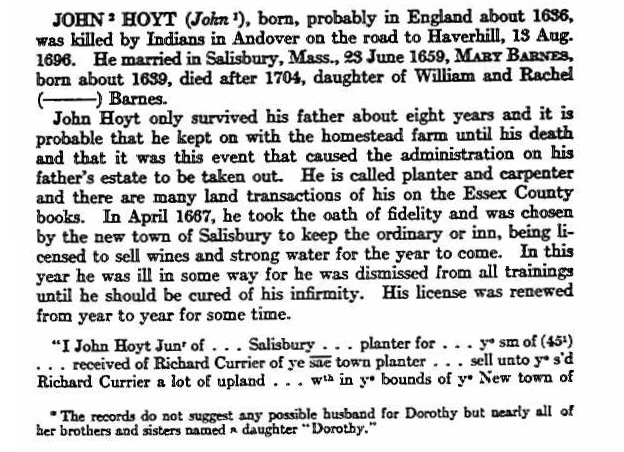 Mary’s first husband Christopher Bartlett was in Newbury, MA by 1635. John Savage, in his Genealogical Dictionary of New England Settlers, calls him the brother of Richard Bartlett of Newbury, Massachusetts, but documented evidence supporting this contention has not been discovered to date. He married first, 16 Apr 1645, Mary [__?__]. She died 24 Dec 1661. Christopher married second , 19 Dec 1663, Mary Hoyt. He died 15 Mar 1670.

Richard Bartlett came to Newbury, Massachusetts in 1634 from Wiltshire, West Sussex, England. He brought a “Breeches Bible” with him, the first in America. Richard was a shoemaker by trade. He had been born about 1575 in England and died 25 May 1647 in Newbury, Massachusetts. His was perhaps the most prolific of all the Bartlett families in America. His estate was proved and recorded in Ipswich deed book, Vol. 1, leaf 25. 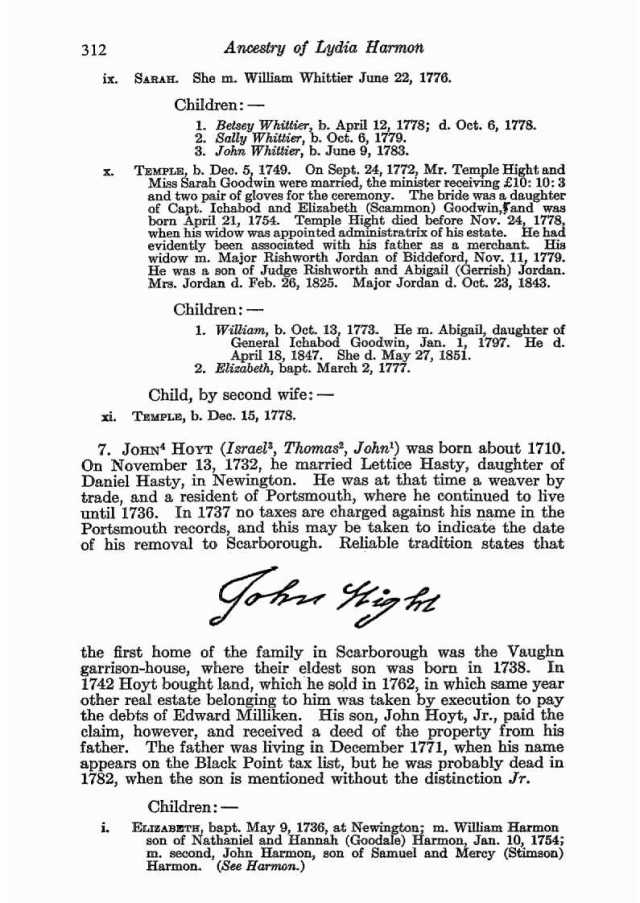 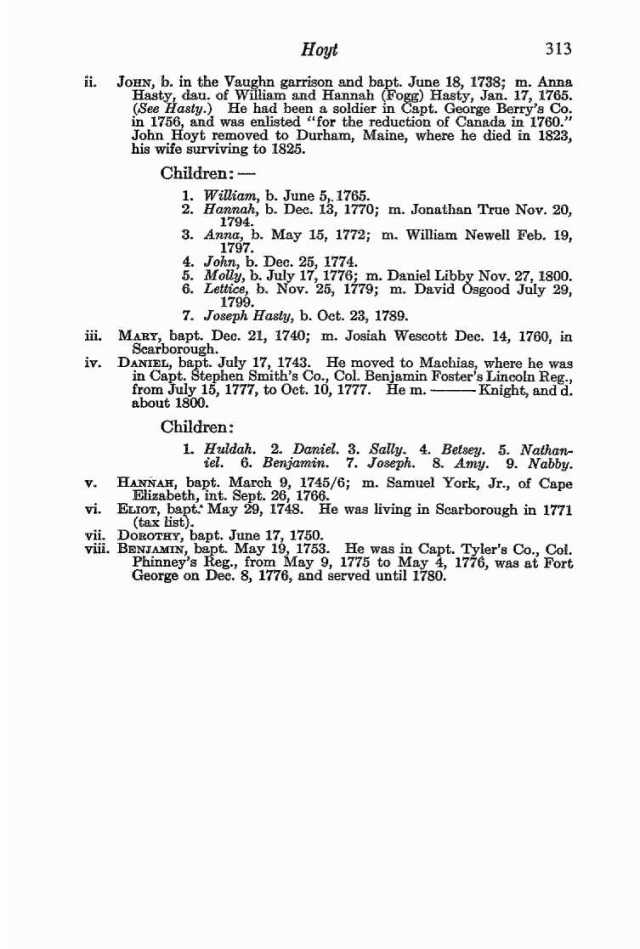 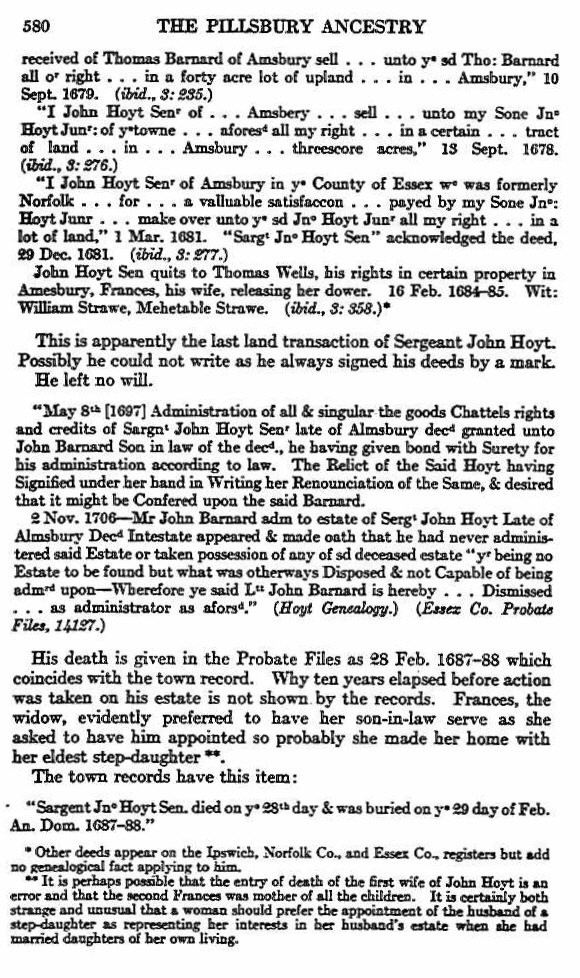 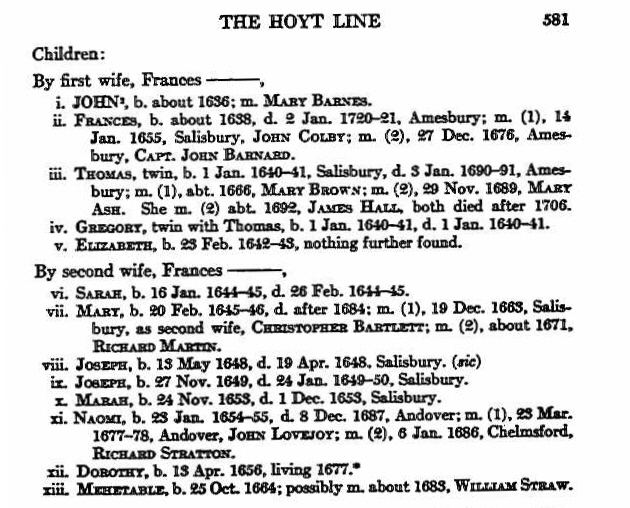