John Safford Jr. was born in 1662 at Ipswich, Essex County, Massachusetts, England. His parents were John STAFFORD Sr. and Sarah LOW(E). He married Hannah  NEWMAN 15 Sep 1685 in Ipswich, Mass.   Many researchers say after Hannah died, John married Abigail Martin on 28 Jun 1702.   However, it was John’s first cousin with the same name John Safford who married Abigail Martin. (See the discussion below)  Our John was married to a Deborah when he died, as evidenced by naming her in his will, but she is not buried in the Preston Cemetery.  John died on 29 Mar 1736 at Preston, Connecticut. 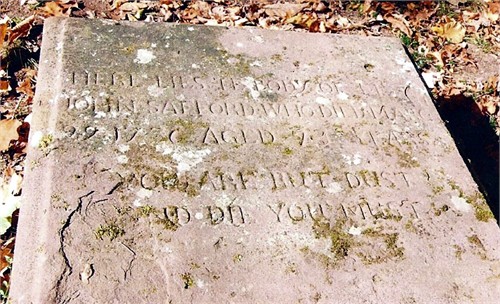 John Safford – Gravestone – Guiles Safford Cemetery, Preston, CT  – “Here lies the Body of Mr. John Safrford who Died March 29, 1736 Aged 73 Years” “You are but dust and die you must”

Hannah Newman was born on 16 Feb 1666 at Ipswich, Essex County, Massachusetts.  Her parents were Thomas NEWMAN Jr. and Hannah MORSE. If Hannah really died in 1702 in Preston, CT. like most genealogies say, then Dorothy [__?__] is probably the mother of Margaret, Joseph and Gideon. However, I can’t find any evidence of Hannah’s date of death or Dorothy’s marriage.

Abigail Martin was born in 1675 in Ipswich, Essex, Mass. Her parents were Samuel Martin and Abigail Norton. Abigail died in 20 Mar 1768 in Norwich, CT.

We are not descended after all to the Abigail Martin that testified that she was afflicted by 13 different people in the Salem Witch Trials when she was a teenager.  John’s first cousin John Safford married Abigail in 1702, 10 years after the witch trials were over.

Children of John and Hannah:

John and Hannah settled in Preston, Connecticut with other Essex County families.  In 1686, Thomas Parke, Thomas Tracy, and several others petitioned for and were granted by the Connecticut General Court authority to establish a plantation seven miles square to the east of Norwich and north of New London and Stonington.  Owaneco, son of the Mohegan sachem Uncas, gave a confirmatory deed for the land in 1687. In October of that same year, the town was formally incorporated as Preston.  John’s daughter Mary later married a Parke and then married a Tracy.

Most of the land which makes up the present town of Voluntown was granted in 1700 by the Court to the Volunteers of the Narragansett War in 1700, thus the name “Voluntown.” Preston is 10 miles from Voluntown was maybe John Safford’s homestead was halfway between the two modern villages.

In 1705 the town was surveyed and boundaries were established. The plot was drawn up into lots, with each eligible volunteer receiving a lot. The land was rough terrain, although fertile soil, and was in a remote location.

According to a portion of the will provided by another Safford researcher John’s son Joseph and Gideon were executors. He leaves to his wife Deborah all movable estate. To three living daughters, Mary Tracy, Elizabeth Whipyrill and Margaret Bingham.  Charity Perkins Rathbone, eldest daughter of daughter Hannah, and Zipporah Haskell, eldest daughter of daughter Sarah, the granddaughter to share equally with their aunts.

To wife Deborah £10 etc. expressed in two bonds under the hands and seals of sons Joseph and Gideon, the goods she brought with her, her choice of two good cows, a good horse to ride on, etc.

No mention is here made of son John, born 1687. No mention is made of him as being buried in the Safford Cemetery, either. Marcy is probably daughter Mary, b 1697, Elizabeth, b 1700, Margaret, b 1703. Daughter Hannah had evidently died by this time as evidenced by the will, same with Sarah, b 1694. With Gideon and Joseph as executors, that makes 7 listed. Only John is not listed.

The John that married Abigail Martin moved to Norwich Ct., fairly close to Preston. He is buried in the Ames Cemetery in Lisbon, Ct. He died 12 Aug 1739, age 66, thus born circa 1673.   The tombstones of both Abigail and John are still existing in the Ames Cemetery.

Information about the Safford family is confusing and conflicted.  It’s difficult to say for sure just who was married to whom.

There were two first cousin John Saffords, both from Ipswich, Mass and they both moved to Connecticut. One John was born in 1663, the other in 1673.  The John that married Hannah Newman was the son of Joseph. They moved to Preston, New London, Ct. He died there March 29, 1736 at age 73, thus was born in 1663.    He is buried in the Safford Cemetery. He evidently married twice, the second time to a Deborah, as evidenced by a will he wrote naming her.

John’s cousin that married Abigail Martin moved to Norwich Ct., fairly close to Preston. He is buried in the Ames Cemetery in Lisbon, Ct. He died 12 Aug 1739, age 66, thus born circa 1673.

Elizabeth  might have married a James Braman of North Kingstown, RI who purchased property in Voluntown, New London, CT in 1729. He and wife Elizabeth had seven children between 1730 and 1740; he died by Nov. 1739 when his probate was started.

Gideon’s son Thomas b. 1738 was a soldier in the French and Indian war and was in Captain Jonathan Brown’s company at Lake George in 1758. During the revolution he was living at or near Watertown, and he enlisted July 2, 1778, with others to serve as guards over the powder magazine for six months. He continued to serve on this duty until August 2, 1779. He was called “corporal” in some of the records. He married at Watertown, July 31, 1764, Sarah Kettell, of Medford, his residence being given as Dedham. His wife joined the Dedham church, March 23, 1766. The only record of birth of children born to Thomas and Sarah is found in Dedham records: Thomas, baptized at Dedham, August 24, 1766, by Rev. Mr. Townsend.