Deacon George Morton was born in 1645 in Plymouth, Mass. He was the eldest child of Ephraim MORTON and Ann COOPER.  He married Joanna KEMPTON on 22  Dec 1664 in Plymouth, Mass.  He succeeded his father Ephriam as Deacon of First Plymouth Church, ordained 25 Mar 1694.  George died 2 Aug 1727 in Plymouth,  Mass. 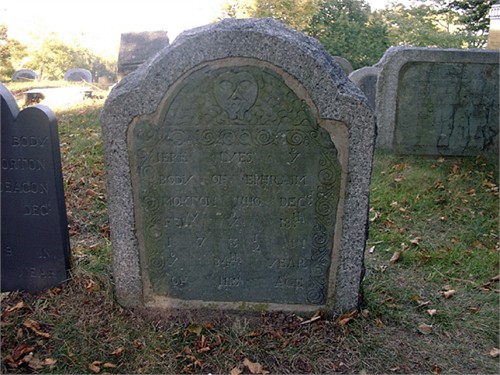 Epitaph – Here lyes ye body of Deacon George Morton who decd Augst ye 2d 1727 in ye 82d year of his age. Deacon George Morton was the son of Ephraim and Ann (Cooper) Morton , born 1645 , and grandson of George Morton who came in the Ann in 1623 , whose wife was Julian Carpenter of Wrentham, England , and married in Leyden in 1612 . Ephraim , the father, was born on the passage to this country and died in 1663 . No stone is said to mark the place of his burial, or that of his brother Nathaniel Morton , who was Secretary of the Colony, and died in 1685 , although he was probably buried near to Deacon Morton ‘s grave

Joanna Kempton was born 29 Sep 1646 in Plymouth, Mass. Her parents were Ephraim KEMPTON Jr. and Joanna RAWLINS.  Joanna’s parents died when she was ten years old and she and her brother Manasseh were adopted into the family of her great uncle Manasseh Kempton.  Joanna died Jun 1728 in Plymouth, Mass.

Deacon George Morton did not marry twice and have a first wife named Phebe as so often cited. This error is best found in Torrey’s compilation “New England Marriages” where there are two marriages listed for Deacon George3 (Ephraim2 George1) Morton in Volume 2, page 1065 of most recent edition which lists the citation reference sources. The big advantage of Torrey is that it contains a very large amount of marriage information from a multitude of sources in a single reference. However the big short coming of Torrey is that the all the extracted marriage data was never verified for accuracy against any original historical records and so it contains many errors. Such is the case for George Morton having a first wife named Phebe.

No primary record of a marriage of a Phebe to George Morton or a death of a Phebe Morton, the alleged first wife of Deacon George Morton, can be found in the original records of Plymouth Colony or the Town of Plymouth records. The original erroneous marriage reference can be traced back to John Savage in his 1861 “Genealogical Dictionary” which is well known to contain many published errors. John Savage stated in Volume 3, page 244: “MORTON, GEORGE, Plymouth, perhaps son of the preceding [George] at least, how the record of Plymouth that mentioned death Phebe, wife of George, 22 May 1663, can otherwise be explained.” The true explanation was Savage did not transcribe last names from the original Plymouth Colony record correctly.

The Plymouth Colony record actually stated: “Phebe Watson the wife of Gorge Watson, died the 22nd day of May 1663” (“Records of the Colony of New Plymouth,” Volume 8, page 23 or The Mayflower Descendant, Volume 17, “Plymouth Colony Vital Records,” page 184). Therefore it was Phebe Watson who died on 22 May 1663 and not Phoebe Morton. So the husband of the deceased Phebe was George Watson and not George Morton. Ironically, Savage did correctly publish the 1635 marriage of George Watson to his wife Phebe Hicks and Phebe’s death correctly in his Volume 4, page 437.

Children of George and Joanna:

George was one of the original purchasers of Dartmouth, Massachusetts, in 1652.

Dartmouth was the first settled in 1652 and was officially incorporated in 1664. It was named for the town of Dartmouth, Devon, England, where the Puritans originally intended to leave from for America. The land was purchased with trading goods from the  Wampanoag chiefs Massasoit  and his son Wamsutta by elders of the Plymouth Colony; reportedly thirty yards of cloth, eight moose skins, fifteen axes, fifteen hoes, fifteen pairs of shoes, one iron pot, and ten shillings’ worth of assorted goods . It was sold to the Religious Society of Friends or Quakers, who wished to live outside the stringent religious laws of the Puritans in Plymouth. There are still Quaker meeting houses in town, including the Smith Neck Meeting House, the Allen’s Neck Meeting House  (named for our ancestor Ralph ALLEN) and the Apponegansett Meeting House, which is on the National Register of Historic Places. Its borders were originally named in the charter (and set by King Philip) as the lands of “Acushnea, Ponagansett, and Coaksett.” This includes the land of the towns of Westport, Fairhaven, and Acushnet, and the city of New Bedford. 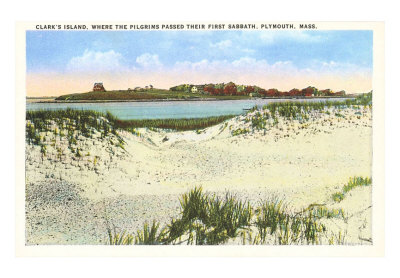 In 1690, while I haven’t been able to prove he was our George or a cousin,  a George Morton was one of the purchasers of Clark’s Island.  Nathaniel Clark, son of our ancestor Thomas CLARK (1605 – 1697)  was Secretary of the Colony for several years under Governor Andros. As a reward for his services, the governor, in 1687, granted Nathaniel the island in the Plymouth Bay known as Clark’s Island. The people refused to confirm this act, as the land had been set aside for the support of Plymouth’s pastor and the poor of the town. The matter was taken to court and Nathaniel Clark and the governor were sent back to England in 1689 to answer for “high crimes and misdemeanors”. Nathaniel later returned to Plymouth where he later died (George F. Willison, Saints & Strangers, pgs 404-5, and 456-7.”

Footnote to Plymouth Church Records, Vol I p265:
“Acting under a warrantfrom Andros dated February 23, 1688, on March 3, Phillip Wells surveyed and laid out Clark’s island for Nathaniel Clark. On June 22, 1689, the sale of the island was authorized by the town of Plymouth, and in 1690 was sold to Samuel Lucas, Elkanah Watson, and George Morton.”

At the summit of Burial Hill, Plymouth, is a row of four stones of slate marking the graves of Deacon George Morton, his youngest son Thomas, his wife Joanna, and his brother Ephraim.  Deacon George’s marker has been bound in granite to preserve it from the weather and to prevent pieces being chipped off by relic hunters.

Ephraim’s wife Hannah Faunce was born 12 Jun 1678 in Plymouth, Plymouth, Mass.  She was his second cousin.  Her parents were Joseph Faunce and Judith Rickard.  Her grandparents were  John Faunce and Patience Morton.    John and Patience came to New England aboard the Anne, 1623.  They married in 1633. In addition to being a planter, John was a businessman, designated as one of the Purchasers for the colony. John was not a member of the original Scrooby group, but was a “stranger” recruited by the merchant adverturers who financed the colony. His great grandparents were George MORTON and Juliana CARPENTER.     Thomas died in 1754..Hannah died 11 Nov 1760 in Kingston, Plymouth, Mass.

Hudson-Mohawk genealogical and family memoirs: a record of …, Volume 2 By Cuyler Reynolds