Children of Thomas and Abigail:

Thomas was one of the founders of Mansfield, Mass.  Mansfield was first settled in 1658 and was officially incorporated in 1775. It was named for William Murray, 1st Earl of Mansfield, a pro-colonial member of the House of Lords. Mansfield is largely known for being the home of the Comcast Center (formerly Great Woods, Tweeter Center) concert venue, one of the most popular in Massachusetts.

From the History of Bristol County.  Thomas IV was 47 in 1732 while his father Thomas III was 64 years old.  This passage could refer to either one.

“In 1732 the Grovers, Skinners, and others to the number of twenty-five or thirty families, having for many years attended meeting in Taunton, Norton, or Wrentham, determined to separate themselves from the Norton Church, or North Purchase, and they mustered all the heads of families and all permitted to vote in Parish affairs and started for Norton meeting house, and where the question was settled that they could have a parish at Mansfield.

Another meeting was held June 27, 1733 at which Thomas SKINNER  was chosen moderator.

1740 – Thomas and Abigail admitted to the church at Norton, Bristol, Mass

Thomas Skinner ran to the Indians: muster roll of Capt. Joseph Heath and Company from May 2, to 14 Nov 1723.  I’m not sure what this means.  It is from Letters of Col Thomas Westbrook and others relative to Indian affairs in Maine (vol 48, p 281).

15 Mar 1748/49 –  Abigail Skinner, administrator of the estate of Thomas Skinner, late of Norton, she was appointed guardian of his children, Thomas, Ruth and Ann, minors over 14

5 Jul 1754 – Thomas Skinner, 2nd, late of Norton; widow’s dower set to Widow Abigail land which was some that “belonged in July, 1714, to Mr. Thomas Skinner, father of the deceased.”

1763 – Administration of estate of widow Abigail Skinner, late of Norton, given to Thomas Skinner. Heirs not given 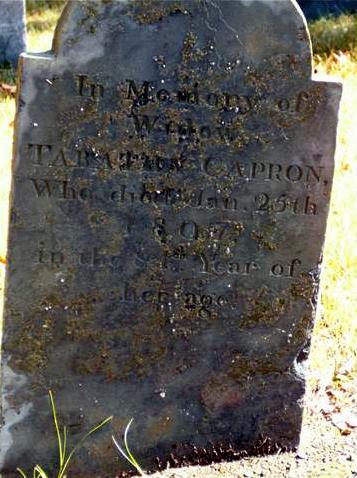 Children of Tabitha and Benjamin:

Benjamin was a  Private, in Capt. Stephen Richardson’s Attleboro co. of Minute-men, which marched on the alarm of April 19, 1775; service, 6 days; reported enlisted into the army May 15, 1775.

Capron, Benjamin, Jr., Attleborough. Order for wages, etc., on Ephraim Newell, Town Treasurer of Attleborough, dated July 5, 1776, for service on the alarm caused by the battle of Bunker Hill; also, list of men in Capt. Richardson’s co. of No. 12 Attleborough serving in the 9th campaign, known as the quot;quarter-draft” or three months campaign, begun in Dec., 1776; also, Capt. Stephen Richardson’s 4th (2d Attleborough) co., Col. Daggett’s regt.; list of men serving in the 10th campaign, known as the “quarter” or three months campaign at Howland’s Ferry in 1776 and 1777.

A George Capron was a member of Ethan Allen’s Green Mountain Boys.  Was he ours?  A Jonathan Capron was  Allen’s Quartermaster

1791 – George Capron appears on a list of people who signed a letter to ‘The Honorable President and Director of the Bank of the United States of America’ asking for a bank to be opened in Norfolk.

John responded to the Lexington Alarm in Captain Stephen Richardson’s company, and subsequently served as corporal and sergeant.  He is a proven Revolutionary War Patriot accepted by the Daughters of the American Revolution. Ancestor #: A128411.

Woodcock, John, Attleborough.Private, Capt. Stephen Richardson’s (Attleboro) co. of Minute-men, which marched probably on the alarm of April 19, 1775; service, 9 days; also, copy of an order on Ephraim Newell, Town Treasurer of Attleborough, dated July 5, 1776, for wages due said Woodcock and others for service on the alarm caused by the battle of Bunker Hill; also, Capt. Stephen Richardson’s 4th (2d Attleborough, also given Attleborough No. 12) co., Col. Daggett’s regt.; list of men who served on the 5 months campaign at York in 1776, known as the 6th campaign; also, list of men belonging to Capt. Stephen Richardson’s co. of No. 12 Attleborough who hired for the “Grand Campaign of all” for 3 years or during the war; said Woodcock, Corporal, with others, hired Samuel Bentley; also, Corporal, Capt. Moses Willmarth’s  co., Col. Thomas Carpenter’s regt.; service from Aug. 17, 1778, to Sept. 9, 1778, 24 days, on expedition to Rhode Island; also, Sergeant, Capt. Alexander Foster’s co., Col. Isaac Dean’s regt.; marched July 31, 1780; discharged Aug. 8, 1780; service, 10 days, including 2 days (36 miles) travel home; company marched to Tiverton, R. I., on the alarm of July 31, 1780.

Macomber,Lemuel.Capt. John Pain’s co.; list of men stationed at Winter Hill and Dorchester for about 2 months and dismissed April 1, 1776.

Lemuel received a pension of eight dollars per month commencing on April 16, 1818 for his three years of service in the Massachusetts line. See Lemuel’s survivor’s pension file

Abiel Peck and Ruth Skinner: came to New Brunswick in 1783 as Loyalists and settled in Hopewell Parish, Albert County:

The Peck grant was taken up by Abiel Peck, great-great grandson of Joseph PECK who emigrated from England to Attleboro, Mass. in the year 1636. Abiel Peck was born in 1730 and married Ruth Skinner of Attleboro. He came to Cumberland at the time of the Revolution and shortly after to Shepody where he obtained a large tract of land from the government said to contain 6,000 acres. The most of this land is still owned by the Peck family.

A tombstone in the old Peck burying ground bears this inscription ‘Here lies interred the body of Abiel Peck, a native of Boston, and one of the first settlers of this place, who, on the 16th of Dec., 1802, unfortunately perished in a boat, in the 73rd year of his age, leaving upwards of three score descendants to lament his melancholy fate.’ During his life the country was a comaparitive wilderness with no roads nor means of communication with the different settlements along the shore, except by water. It was upon one of these occasions, while attempting to cross the Bay from Dorchester to his own place in an open boat, that he lost his life. The boat was picked up in a cove near the Joggin, now known as Peck’s Cove. The elder Peck had eleven children.

One of these, Rachel Peck, married Thomas Calhoun, grandfather of George Calhoun, now Registrar of Deeds for Albert Co. The grant was for the most part divided among his immediate family, the last side of the grant, when he had first settled himself, being given to his son Abiel. The next lot, the only one that went outside of the family, was sold to David Hoar from Colchester, N.S. The next farms were occupied by his sons Elisha Peck and Thomas Peck and his sons-in-law, Nicholas Pearson, John Edgett, Oliver Stiles and Joel Edgett.

Children of Ruth and Abiel:

Thomas Calhoun and his brother William along with a Peck brother-in-law were harvesting grindstone in the Bay of Fundy when their boat capsized and they were all drowned.  William was unmarried and Thomas’s wife remarried Thomas Dixon and had a large family.

Abiel  settled on a portion of the extensive tract in Hopewell owned by his father.  He held a captaincy in the militia and was always alluded to by the old settlers as Capt. Peck.

Joel Edgett came to New Brunswick in 1783 as a Loyalist and settled in Hopewell Parish, Albert County.

Elisha resided in Shebody, hence Hopewell, Albert, New Brunswick on a portion of the lands owned by his father.

Thomas along with his brothers settled in Hopewell Parish, Albert, New Brunswick upon lands given him by his father, where he lived a died a wealthy farmer.

Albert County, New Brunswick — Hopewell Paris, pip 2011 of 643,  is bordered to the north by Hillsborough Parish, to the east by Petitcodiac River and south by Harvey Parish, and to the west by the Elgin Parish.

John Edgett came to New Brunswick in 1783 as a Loyalist and settled in Hopewell Parish, Albert County.

Thomas was a house carpenter.

16 Mar 1757 – Thomas Skinner appears on as a private on a list sworn to at Norton of 2nd company of Militia, commanded by Col. Ephraim Leonard, comprising the Train Band and Alarm list

Children of Thomas and Hannah:

Thomas was a Revolutionary Soldier 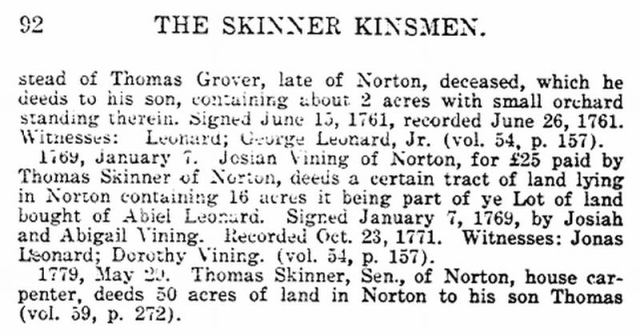 Children of Ann and Hezekiah:

i.  Hezekiah Peck b. 22 May 1755 in Norton, Bristol, Mass; d. 1812 Newport, New Hampshire; m. Hepsibah Dryer of Rehoboth  Hezekiah and Hepsibah had at least one child, Esther who married David Nettleson

1 May 1779  – Hezekiah and his brother Henry purchased lands in Newport, New Hampshire from Phineas Wilcox.

Henry Peck came to Newport, Sullivan, New Hampshire about 1779 with his brother Hezekiah,  He lived in the east part of the town and had charge of the Giles mill then standing on the site of the Granite Mills.  From there he moved to Lowville, Lewis, New York

The Skinner kinsmen, the descendants of Thomas Skinner of Malden, Mass By Natalie R. Fernald
The Pioneer Press Washington, DC 1900 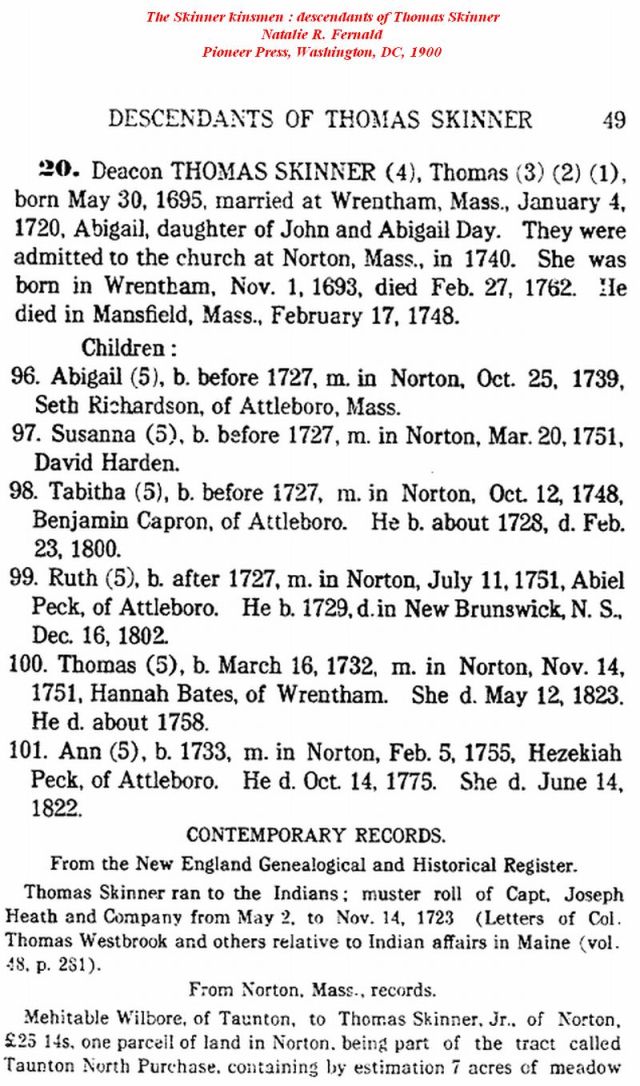